by Medical News
in Cancer
0

Musician, singer and songwriter Brigid Kaelin reads the book she received from a neighbor in a “book swap” because of library closures during COVID-19.

Let’s just skip all this.

That was Brigid Kaelin’s attitude as doctors told her they wanted to perform a lumpectomy on the 8-millimeter tumor they’d found inside her right breast.

The abnormality had evadedbotha mammogram and an ultrasound, and it only appeared on a diagnostic MRI in September that COVID-19 had delayed three times this year.

She’d known something was wrong with her body for months. This was the first time doctors had found cancer inside her, but Kaelin had been fighting the disease on and off for more than two decades.

Cancer littered her family history. She watched it kill both of her parents.

Every woman on her mom’s side of the family had had breast or ovarian cancer, and every man had been diagnosed with prostate or colon cancer.

She’d already nursed both her boys and at age 42, she knew she didn’t need her breasts anymore. They weren’t worth dying for.

“This is clearly heredity,” she said. “Get them both removed.”

By the time I talked to Kaelin on the phone, she’d been home from her outpatient double mastectomy about 10 days and was awaiting the results.

Originally she’d planned to keep her cancer to herself when she was diagnosed Sept. 18. She had painful memories of learning her mother was going to have to fight the disease, and she didn’t want to do that to other people.

Then she realized sharing this part of her is one of the few things she can do. The diagnosis is just a little more than a month old, but her story is already one of vigilance, self-awareness and advocating for yourself. She agreed to let me tell it to you in honor of Breast Cancer Awareness Month.

But before we dive into that, I want you to know there’s a lot more to Kaelin than that 8-millimeter tumor.

More: Retired JCPS counselor beat cancer once, but now she’s learning to live with it again

The Louisville woman is a true entertainer and a storyteller. The singer-songwriter plays more than 10 instruments, tours Europe annually, and is a staple in our local music scene. On top of all that, she’s currently working on a memoir about the time she spent being a caregiver to her mother and her father.

Kaelin never expected that book to have a third act where she turned up with her own cancer. It’s the cruelest, most unbelievable plot twist in a year that’s been overall unimaginable.

Her generation has watched so many romantic comedies, she told me, eventually you just assume your life is going to “tidy up.” Between taking care of her parents and now this, that just hasn’t beenthe case for her.

The first time she noticed something wasn’t long after her father died last summer. She started putting more energy into self-care, and she knew her body felt off. It could have been anxiety, of course, and plenty of people told her that, too. It could have been grief. She was 42-years-old, and now she’d lost both of her parents. She was an only child, so the only family she had now was the one she built with her husband. 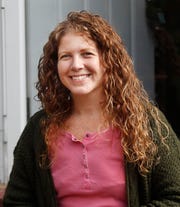 Brigid Kaelin, a local singer, shares her story about breast cancer and getting a mastectomy in a pandemic. 10/21/20 (Photo: Scott Utterback/Courier Journal)

They were mild symptoms, and they could have meant anything. She lost her appetite.  There was a sensation — like a tingle or a burning — inside of her that just wouldn’t go away, and pain radiating up and down her shoulder. She first started talking with her general practitioner about her fears in November.

Kaelin had watched her father deteriorate as he cared for her mother, who passed in September 2018. He’d battled cold and breathing symptoms that every doctor seemed to think was just allergies.

By the time they caught her father’s sinus cancer, it was too late. The disease turned so gruesome that it flipped his eyeball upside down. She watched the pain her eldest son went through as cancer took his vibrant, friendly grandfather — his buddy and best friend — and attacked his whole body.

“His experience with cancer is you get really sick, then you feel terrible then you die,” she told me.

She didn’t want to watch her son grieve her, too.

So she threw everything she had at that tingle.

Kaelin scheduled a diagnostic mammogram for March 11, and well, we all know what happened that week. COVID-19 hit, the Louisville-based musician lost nearly every gig after she had to “cancel everything,” and her children began doing their schooling from home. Amid all of that, her mammogram came back clear.

Needless to say, their world changed, but even with thatnegative mammogram, the growing fear about her body did not.

After all, she knew a mammogram missed her mom’s cancer the first time, too.

So she and her kids read books, lots of books. They did outdoor movie nights with a small group of neighbors where everyone sat several feet apart and wore masks.

She’d managed to qualify for the high-risk breast cancer clinic, but just because she was on their roster didn’t mean they could treat her. Between the pandemic and the fact her age put her at the bottom of their list, she met multiple delays.

She underwent surgery on her rotator cuff to help with what appeared to be shoulder pain. That was considered essential but the next test on her list a diagnostic MRI — which involved laying on her stomach and having her breasts hang through two cones — was not.

She finally went for the MRI on Sept. 10, and it lit up that tumor she’d known was there all along in a way the mammogram and the ultrasound she had could not. Six days later she had a biopsy, and two days after that she received a phone call on Rosh Hashanah, or the Jewish New Year, while she and her sons were sitting under a tree doing crafts.

“It was part relief in that I got an answer that was definitive,” she told me. “Uncertainty with the pandemic is what’s driving us crazy. That’s what it is without the cancer diagnosis, it’s just pure uncertainty.”

For a moment, she enjoyed that sensation that she wasn’t making the disease up in her mind.

Then she was angry.

Also: For many, being a hospital volunteer is a calling. But COVID-19 means they can’t help

“Nobody can tell you you’re going to be fine,” she said. “And anyone who does? What do you know?”

Having just lost her parents, she knew what kind of a nightmare juggling the health care system could be. There’s a learning curve that comes with that, she told me, and she didn’t have time for her husband to adapt to it.

Kaelin wanted appointments on the books, and she wanted that tumor gone. She’d already been living with the abnormality inside her for far too long. They’d originally offered her a surgery in mid-November, and she pushed back.

“I’m young,” she said, recalling that first week. “I’ve got these kids. I’m going to live. You’re not going to push my surgery off.”

She checked into the hospital for her surgery Oct. 8. Because of the pandemic, she had an outpatient procedure, and her husband spent the bulk of the day waiting for her outside the hospital inthe car. Her two young sons spent the afternoon playing outside at a neighbor’s home.

She has no memory of the car ride home and halfway recalls coming up the stairs and realizing her children were still awake well past their bedtime.

But she was home, and her breasts and that tumor were finally gone.

A few days later as Kaelin and I spoke on the phone her two sons — one in preschool and the other a first grader — were having “math wars” in the background behind us. She paused, briefly, when the youngest let out a frustrated cry.

“This is third-grade math and you’re four, that’s why it’s hard,” I heard her tell him through the phone.

That’s the kind of conversations she should have been having on a Monday morning, while she’s homeschooling her children in the middle of a pandemic. Instead, though, wewere reliving everything that led up to that double mastectomy and talking about everything that still had to come.

Kaelin felt exhausted and brain-fogged from the anesthesia. She had pain from mastectomy and her armpits were sore. She couldn’t feel her breasts at all.

“I can tap on my so-called boobs, and it’s nothing,” she said.

Even so, she’d let them take her ovaries tomorrow if the doctors would do it, she told me. Given her family history, she expects they’ll cause problems eventually.

For the immediate future, though, she’s worried she might need radiation and chemotherapy, and she’s afraid those treatments might make her a bad mother. Kaelin has seen what those drugs can do to a person, and that’s not what she wants her sons, Graham and Angus, to have to grow up around.

She already misses having energy and running around in the backyard with them.

A couple ofdays after our talk she told me through a text message the doctors actually found four tumors in her right breast and they were staging them at 1a. They’re smaller than a peanut, and the cancer hasn’t spread to the lymph nodes.

Her “let’s just skip all this” mentality served her well, a lumpectomy likely wouldn’t have gotten them all.

But she also knows this isn’t over yet, either. She’s waiting for the test to determine whether she’ll need treatment, and she also is investigating second opinions to make sure she gets all her bases covered.

“I’m trying to lower my expectations of the future, so I can feel some semblance of control,” she told me.

Features columnist Maggie Menderski writes about what makes Louisville, Southern Indiana and Kentucky unique, wonderful, and occasionally, a little weird. If you’ve got something in your family, your town or even your closet that fits that description — she wants to hear from you. Say hello at mmenderski@courier-journal.com or 502-582-7137. Follow along on Instagram and Twitter @MaggieMendersk

Differences Between Seasonal Allergies and COVID-19

Today, Joe Biden picked Kamala Harris as his running mate. With both candidates …